Are e-cigarettes more dangerous than regular ones?

These aforesaid stunning headlines refer to the study commissioned by the Ministry of Health of Japan which was published in November 2014. Link to survey: http://www.mdpi.com/1660-4601/11/11/11192/htm Reading the results and conclusions of this study leaves no doubt that the media has twisted the truth in its articles. To attract clicks, of course.

The study analysed the concentrations of chemical substances in e-cigarette's vapour. To this end, products from 13 different Japanese e-cigarette brands were used. The test was conducted using a machine which smoked the e-cigarette and then blew out the vapour which was analysed in this study.

The study states that the main carcinogens and toxic compounds like nitrosamines and polycyclic aromatic hydrocarbons (PAH) are present in the smoke of traditional cigarettes but not in the vapour of e-cigarettes. Content of nitrosamines in nicotine substitution treatments like patches and gums is similar to that of regular cigarettes. The said study focused on carbonyl compounds and their concentrations present in e-cigarette vapour. The study compared 13 Japanese e-cigarette brands and analysed the concentrations of the following carbonyl compounds in the vapour: formaldehyde, acetaldehyde, acetone, acrolein, propanal, crotonaldehyde, butanal, glyoxal and methylglyoxal.

For four e-cigarette brands, no carbonyl compounds were detected. The vapour of the remaining nine brands featured different carbonyl compounds - some in higher concentrations and some in lower. The vapour of only one e-cigarette brand contained 10 times more formaldehyde than regular cigarette smoke. However, this fact did not stop the media from building on this information and claiming that e-cigarettes are 10 times more harmful than regular ones.

The battery power had a major role in the study results. Increasing the battery voltage from 3.2V to 4.8V led to a 4 to >200 time increase in the concentration of formaldehyde, acetaldehyde and acetone in e-cigarette vapour. The said study employed battery voltages exceeding 3V.

The study led to the conclusion that the vapour of some e-cigarettes contains carbonyl compounds which can affect health but in most cases the levels of these substances are lower than in regular cigarette smoke.

A considerable number of studies on e-cigarettes has been conducted and the statement that e-cigarettes are the healthier alternative to regular cigarettes has rarely been challenged. However, relevant regulations should be put in place without delay so that consumers could be assured of the quality of e-cigarettes. Because the market is not regulated, there are all kinds of produce available. In this context, the results of the said study generates more questions than it provides answers which certainly gives the media channels the opportunity to publish intriguing headlines which attract many clicks. 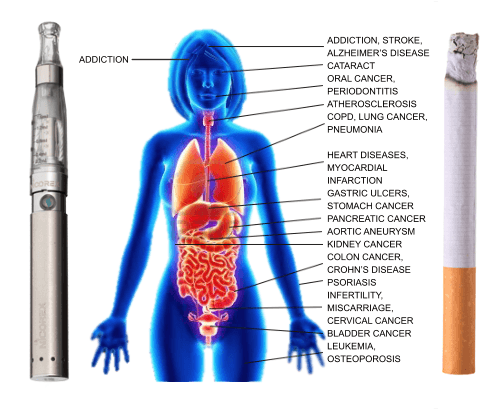